Paleontology in the news 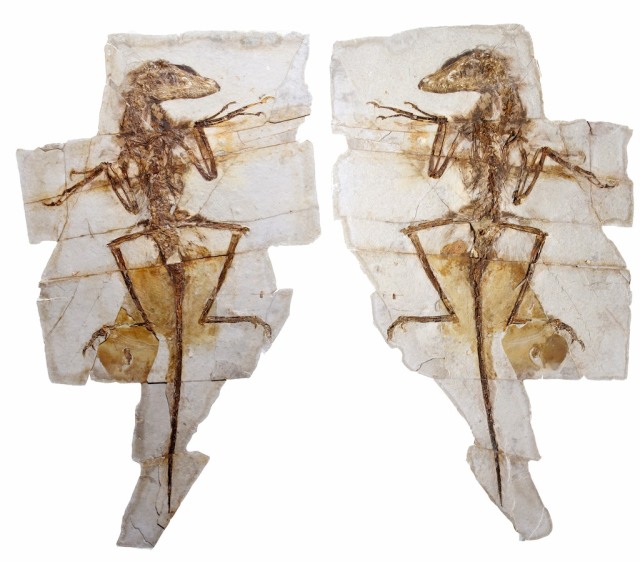 Some interesting articles published in Science this week have been getting a fair amount news coverage. First is a report by Alan Turner, Peter J. Makovicky, and Mark A. Norell on the presence of feather quill knobs in the dinosaur Velociraptor. In modern birds these are evenly-spaced bumps on the forearm bones to which the secondary (flight) feathers attach.

The presence of feathers in Velociraptor is not a huge surprise. Velociraptor is a member of the family Dromaeosauridae, which is very closely related to the birds. A small unnamed dromaeosaur from China shown at the top of the page has a fairly dense covering of down-type feathers. 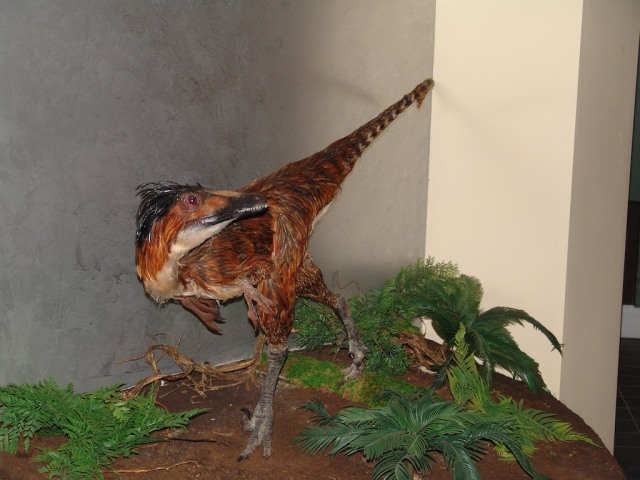 Many paleontologists have suspected that most if not all of the dromaeosaurs were feathered, as shown in the reconstruction above of Dromaeosaurus (on exhibit at the Canadian Museum of Nature in Ottawa.) But this paper is the first direct evidence of secondary feathers in a large dromaeosaur.

The abstract of this paper is available here; the figure from the paper showing the forearm bone is here.

The second paper is by 10 authors; the lead author is Matthew W. Tocheri of the Smithsonian. This paper concerns the validity of the hominid species Homo floresiensis, popularly known as the “hobbit.” To review, H. floresiensis was based on a tiny skeleton of a remarkably small-brained human from the island of Flores in Indonesia. What’s especially striking is that it is associated with stone tools, and survived until as recently as 13,000 years ago. The original authors suggested that the hobbits were directly descended from Homo erectus, and were an example of island dwarfism.

Since the original description in 2004 there has been a raging debate as to the status of H. floresiensis. A substantial number of workers believe that the only known complete skull actually represents a microcephalic modern human. A number of papers have been published supporting each viewpoint, and the new article by Tocheri et al. is the latest. This paper reports on H. floresiensis wrist bones (carpals). According to Tocheri et al. the wrist is more primitive than either modern humans or Neandertals, eliminating the possibility that the hobbit is a microcephalic human.

These results are already being disputed (see the comments of Penn State’s Robert Eckhardt in this NY Times article). There is some dispute about the amount of variation in the wrists of modern humans; it’s possible that the shape of the hobbit carpals falls within the range of what’s observed in modern humans. It looks like this debate is going to continue.

The abstract of Tocheri et al. is available here; their figures of the wrist bones are here.

This entry was posted in Uncategorized and tagged Dinosaurs, hominids. Bookmark the permalink.