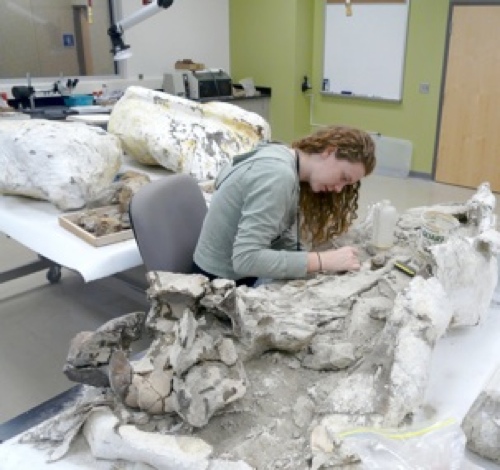 For the last four months Allyson Gardner, an intern from Patrick County High School, has been working on a fossil whale skull from Westmoreland County, Virginia. This whale, which has not yet been identified, is probably the toughest preparation job we have in the lab right now. The bones are extremely soft, and the skull fell apart when the whale died, probably because of a combination of being a very young animal, and lying on the seafloor rotting for awhile before burial.

This whale was discovered by volunteer Paul Murdoch in March of 2004, weathering out of a cliff about 10 feet above the Potomac River. Later that month Paul and I returned to collect it, with the help of volunteer Carter Harrison, and Bill Counterman and Stephen Godfrey of the Calvert Marine Museum. Preparation was actually started last year in the old museum facility, and it was moved to our new building several months ago. 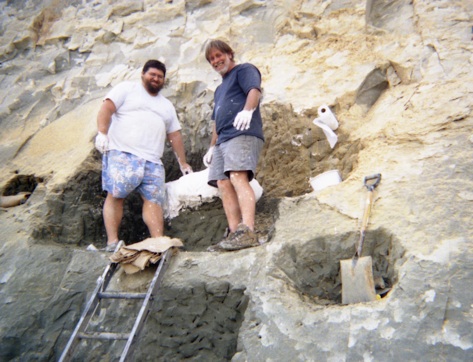 This whale was collected in a rock unit known as Bed 14 of the Calvert Formation, which is the same unit that is exposed at Carmel Church 40 miles to the southwest. Bed 14 is (coincidentally) thought to be around 14 million years old. It is a very fossiliferous unit, and at least six species of baleen whales have been found in it, but so far we haven’t identified this particular specimen.

This entry was posted in Chesapeake Group and tagged Cetaceans. Bookmark the permalink.