The first meeting of the Southeastern Association of Vertebrate Paleontology began this morning. The meeting is being hosted by the Gray Fossil Site and East Tennessee State University. The talk schedule is available here (pdf format).

There were four talks in the first session this morning. Two of the talks concerned the Pleistocene deposits at the Clark Quarry in Brunswick, Georgia. Kelly Clark, Alfred Mead, and Robert Chandler presented on the birds from the site, particularly the cormorants. An interesting point is that, while the birds at the site belong to living species, they tend to be larger than their living counterparts, likely as a result of colder Pleistocene temperatures (large animals are generally selected in colder temperatures).

The other Clark Quarry talk, by David Patterson, Alfred Mead, and Robert Bahn presented Mammuthus columbi material from the site. M. columbi is the largest of the North American mammoths, and I was surprised to learn that the type specimen of this species was a tooth from near (or at) the Clark Quarry nearly 200 years ago, which was examined but Charles Lyell. There is a chance that the new material could be more of the type specimen.

Mammuthus columbi from the Florida Museum of Natural History.

Blaine Schubert, Richard Hulbert, Andreas Kerner, and Timothy Heaton presented records of the short-faced bear Arctodus simus (and other bears) from Florida. A. simus was not previously known from the southeastern United States (the most southeastern record being from Saltville, Virginia). 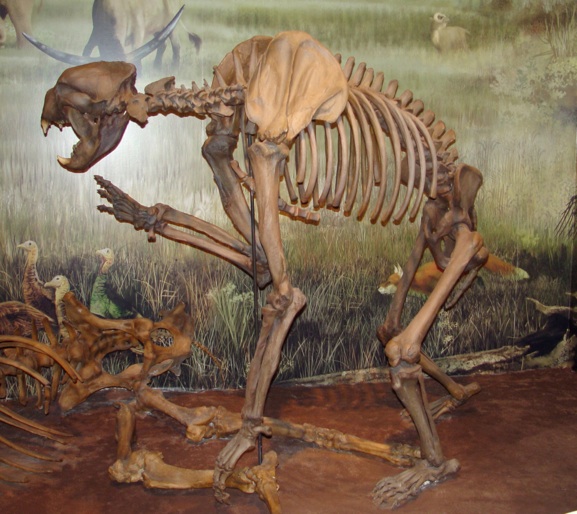 Arctodus simus from the Oklahoma Museum of Natural History.

Timothy Gaudin, Ashley Miller, Jeremy Bramblett, and Thomas Wilson presented on Pleistocene bats from caves in the Chattanooga, TN area. A fascinating aspect of their study was that the bat fauna was dominated by the cold-tolerant Eptesicus until around 15,000 years ago, but these were largely replaced by the more warm-natured Myotis as the climate warmed at the end of the Ice Age. Ominously, all the bats disappeared from these caves around 500 years ago, apparently as a direct result of human disturbances.

After lunch there were additional talks. Steve Fields spoke about remains of the giant ground sloth Megalonyx from South Carolina. The South Carolina remains appear to have characteristics in common with two different species of Megalonyx, M. wheatleyi and M. jeffersonii. 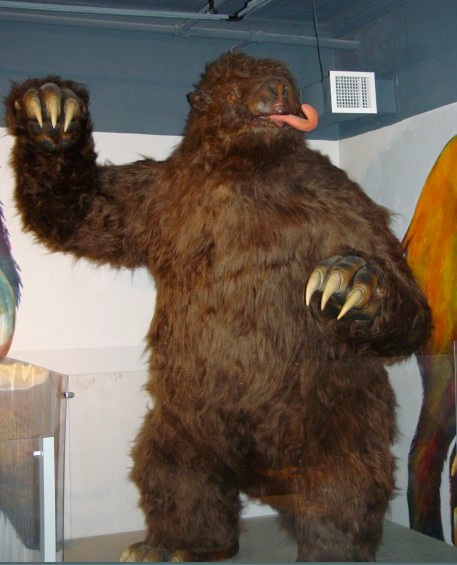 Robert Feranec and Larisa DeSantis presented a Carbon isotope study to see if there were differences in the C12/C13 ratios in the teeth of Canis (wolves) and Smilodon (saber-toothed cats) (there were). The different ratios indicate different prey preferences, with Smilodon apparently being more selective in its prey choices. (Also see my post from last year’s SVP meeting.)

The last talk of the day was James Knight and Larry Martin on the surprisingly diverse mammal fauna at the Walrus Ditch site in South Carolina (and it does include walruses).

We also got tours of the Gray Fossil Site and the museum that was built on the location. The Gray site is a Late Miocene sinkhole that contains huge quantities of fossils. The site was discovered when the Tennessee Department of Transportation was redirecting an intersection on TN Route 75. At the surface, it doesn’t look like much:

Digging down reveals a dark, organic-rich black clay that represents a lake that formed in a sinkhole. TN-DOT redirected the road, and the study of the site began. 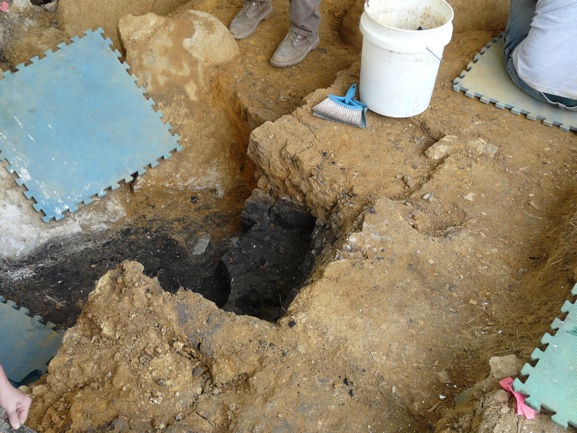 Probably the most common mammal at the site is a tapir, Tapirus polkensis. Today, tapirs are restricted to southeast Asia and South America, but they used to be common in North America. Because of this site, T. polkensis is probably now the best-known fossil tapir in the world. 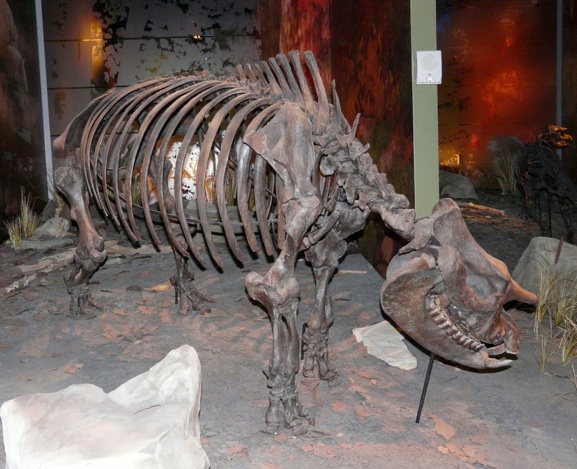 Other mammals include rodents, a saber-toothed cat, elephants, peccaries, and camels. There are also, fish, plants, birds, and a number of different reptiles, including snakes, turtles, and alligators:

One of the prides of the museum is the discovery of a partial skeleton of the red panda Pristinailurus bristoli (shown below beside the skull of a modern red panda). The remains at Gray were only the second report of the red panda in North America, and the skeleton is the only fossil red panda skeleton known in the world (the other specimens are based on teeth).

More talks are scheduled for tomorrow (including mine).

This entry was posted in Conferences, Museums and tagged SeAVP. Bookmark the permalink.