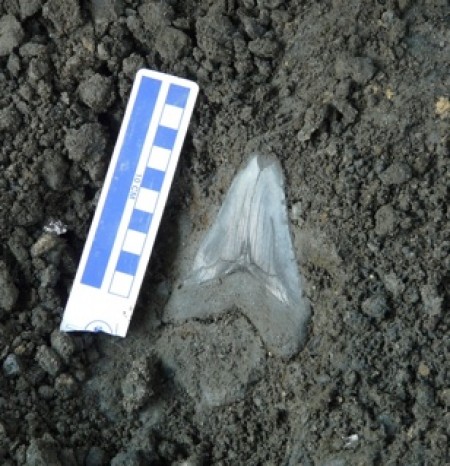 Rain kept us out of the quarry on Thursday, but we were back on site today.

Excavations in the Calvert are slow, but only because were finding so many fossils. We’ve exposed perhaps 10 square feet of the bonebed, and found maybe 2 dozen whale bones and a couple of hundred sharks’ teeth. Jeff Sparks found the most spectacular tooth so far, the fairly large example of Carcharocles megalodon shown above.

I have a better handle on the vertebrae we found on Wednesday, too. It seems that there are at least six vertebrae from a single whale, probably vertebrae 5 through 10. 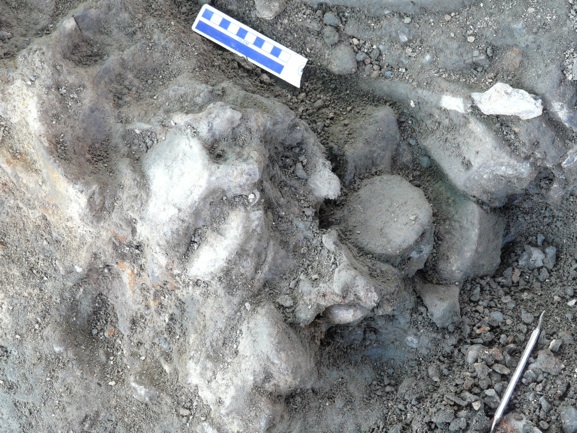 I think we recovered at least part of the skull of this whale last March.

There is also a seventh vertebra in the photo, near the center at the bottom. I think this is likely from a different whale.

The sun came out in the afternoon, so Mary and Amy made the bottom halves of the field jackets for the St. Marys whale:

The St. Marys whale will return to Martinsville this weekend, along with most of the teeth we’ve recovered from the Calvert so far. Tomorrow we have a good-sized crew of seven people scheduled, and we should get a lot of new specimens exposed.

1 Response to Carmel Church Days 4 and 5