Today was the SVP bloggers lunch, where I got to meet a lot of paleontology bloggers, mostly for the first time. I already have links to many of their sites posted, and I’ll be adding more, so make sure you visit their sites–there’s a ton of great information there. 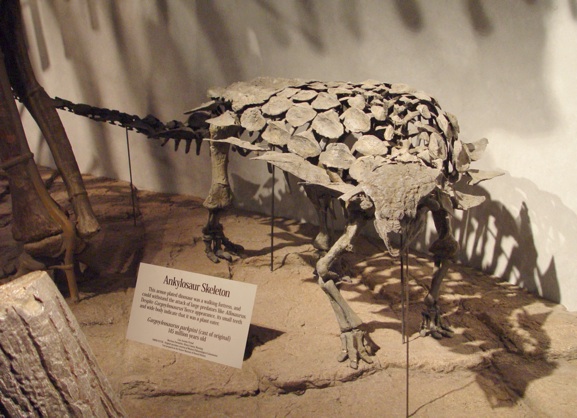 I finally managed to make it to some dinosaur talks today. I saw several talks on ankylosaurs, including Victoria Arbour et al. on the function of tail clubs. Ankylosaurs (like Gargoyleosaurus, above, from the Denver Museum of Natural History) were covered with bony armor plates. In many species the last half or so of the tail vertebrae were locked together, and had a massive knob of bone at the end. One of these clubs (from the National Museum of Natural History) is shown below. The inverted “V”-shapes running down the middle of the bone are the interlocked neural spines of the tail vertebrae.

It was suggested long ago that ankylosaurs used their tail as a club to fight off predators, but this has not been universally accepted, largely because of suggestions that the heavy club would snap the ankylosaur’s tail if it tried to swing it too fast. Arbour et al. showed first that the clubs were actually not very heavy for their size, and did a stress analysis to show that the tail should easily be able to withstand the stress, and that the largest clubs could reach a velocity that would easily break bones in any target animal that was hit. It also seems that the clubs only get really large in fully mature individuals, suggesting that they may have been used more for intraspecific combat that fighting off predators (although these uses are not mutually exclusive, as anyone who has been gored by a deer can tell you).

Cary Woodruff and David Varricchio did an interesting study in which they constructed a life-sized model of a dinosaur burrow out of PVC-pipe to try to reconstruct the depositional environment when the burrow was filled with sediment. (The burrower was Oryctodromeus, a small herbivorous dinosaur related to Hypsilophodon, below, from AMNH.) 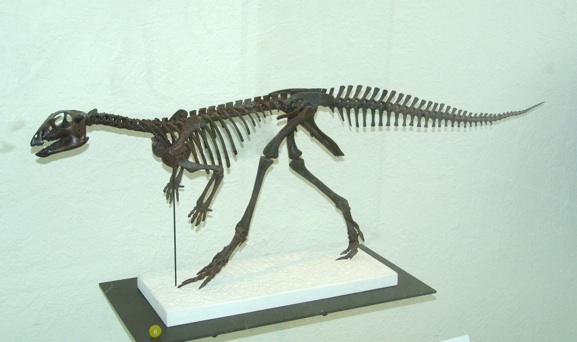 In the experiment, they used a modern rabbit skeleton in different states of preservation and different positions in the burrow, and then flooded the artificial burrow with a sediment-water mixture at different velocities.

Cary Woodruff, who presented this work, spent the summers during his high-school years participating in VMNH’s excavations in Shell, WY; it’s great to see him here, four years later, presenting his own research.

There was another VMNH connection in the poster session, where Brooke Wilborn (who was digging with me at Carmel Church a few weeks ago) presented a study of the apparent difference in diversity between the Jurassic Morrison Formation and the overlying early Cretaceous rocks in the American west. Her work suggests that the Morrison, for all its famous dinosaurs, may be understudied, and that there might be a lot more dinosaurs and mammals waiting to be named from that unit.

Michael Habib proposed a rather wild hypothesis about the giant azhdarchoid pterosaurs like Quetzalcoatlus (below, from the Texas Memorial Museum). 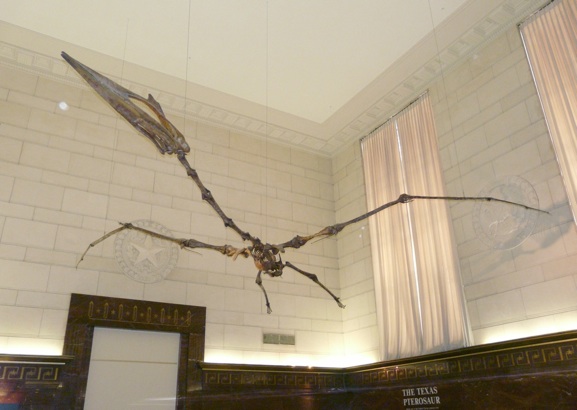 The idea starts by assuming these pterosaurs walked as quadrupeds (which seems to be pretty well established). This alone makes for a remarkable reconstruction, because some of these pterosaurs were so large that as a walking quadruped they would stand as tall as a giraffe. Habib then suggested that they launched themselves into the air using their front legs, rather than the back legs as birds do. In other words, their front legs (wings) were so strong compared to their body weight that they could essentially jump into the air by doing a push-up, and then flapping to gain altitude. For more discussion of this, check out Mark Witton and Darren Naish’s blog Azhdarchid Paleobiology, which is where this image came from: 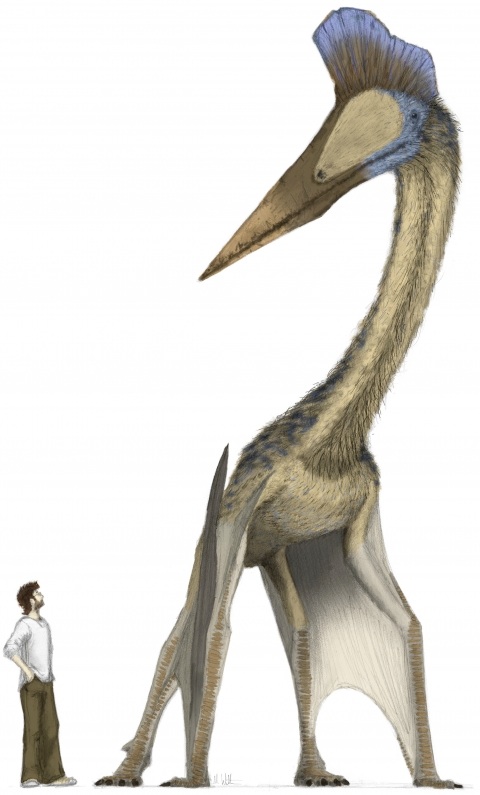 This entry was posted in Conferences and tagged Dinosaurs, SVP. Bookmark the permalink.