Posted on January 9, 2009 by altondooley

There was lots of activity today related to the Boxley stromatolite. We plan to publicly display the stromatolite for the first time tomorrow morning during VMNH’s Dino Dayevent. John Moser of Moser Productions arrived this afternoon with the stromatolite base, which took several months to design and fabricate. Many people have been wondering what a support frame for an irregularly-shaped two-ton stromatolite looks like:

It took a couple of hours of precision forklift work by Rian Culligan the get the stromatolite into place (years ago I had a job driving a forklift, so I was really impressed with Rian’s skill): 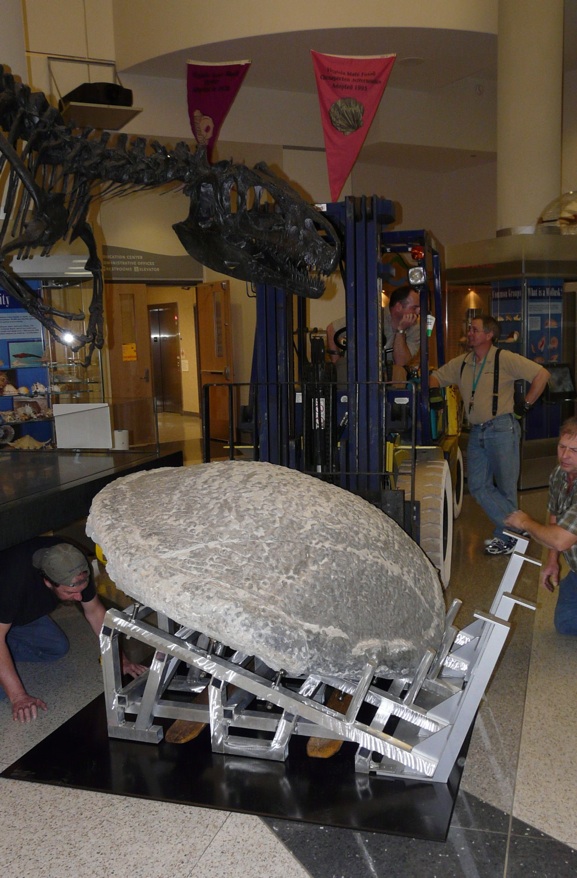 The other stromatolite news is that VMNH has just published my paper on the Boxley stromatolites, as Jeffersoniana Number 19. The complete citation is:

In the paper I suggest that these particular Boxley thrombolites were deposited in a protected setting, possibly a back-barrier lagoon. The reason for this conclusion is the unusual shape of the Boxley specimens. The low domes and thickened rims are similar to modern stromatolites growing in Lake Thetis, a saline lake in southwestern Australia (see photos of the Lake Thetis stromatolites here). The low domes in the Lake Thetis examples are a result of the shallow water in the lake, which prevents the stromatolites from growing into tall columns.

One of the interesting things figured in the paper is a possible mineralized algal filament, which was imaged using VMNH’s scanning electron microscope (this was Figure 5 in the paper; the scale bar is 10 microns):

Figure 2 in the paper was the stromatolite itself:

Tomorrow is Dino Day; if you’re in the Martinsville area stop by to see the stromatolite and other cool specimens we’ll have on exhibit.

This entry was posted in Boxley stromatolite, Museums. Bookmark the permalink.