VMNH’s Dino Day festival was held yesterday. The day started off early with the installation of a new exhibit case. One of our volunteers, Mike Morriss, owns Imageworks, a cabinetry manufacturer in Chester, Virginia. Imageworks is constructing and donating two beautiful cases to the museum, each large enough to hold a decent-sized whale skull. Mike and his family delivered and installed the first case yesterday (above). Here’s the completed case with the skull of “Sinistra”, our Carmel Church Diorocetus, on display: 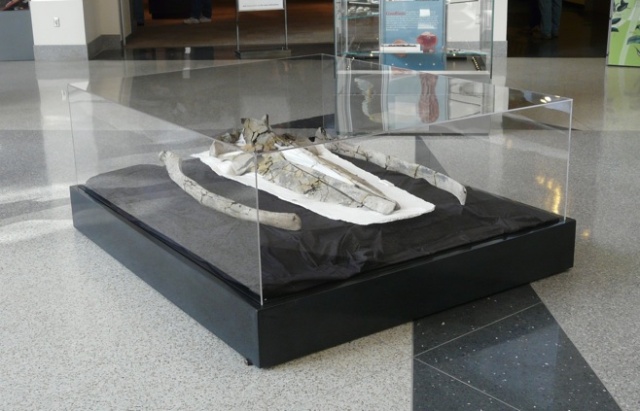 Boxley Materials was also on hand, to give away samples of fossil plants from their Beckley Quarry. Charles Craddock and several other Boxley employees spent the entire day manning the table, handing out specimens and answering questions (this picture was taken before we opened to the public; once we opened the doors it was hard to see this table for all the kids packed in front of it): 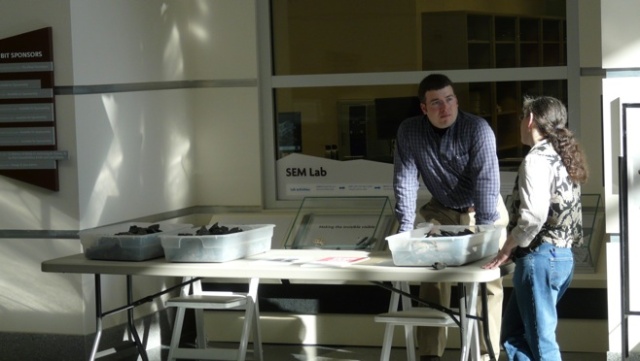 There were two lectures on Saturday. DorothyBelle Poli from Roanoke College spoke on plant evolution, while I spoke about the injuries to “Sinistra”. After the last lecture, we opened a jacket containing a dinosaur femur (somehow, I didn’t take any pictures of it on Saturday, but I’ll post on it next week).

I’d like to thank all the volunteers who helped out in the lab on Saturday, including Brett and Tim Dooley, the Morriss family, Keith Degnan, Alana Dodd, Trell Martin, and Ward Littlefield, as well as the employees of Boxley Materials, for making Dino Day such a success.