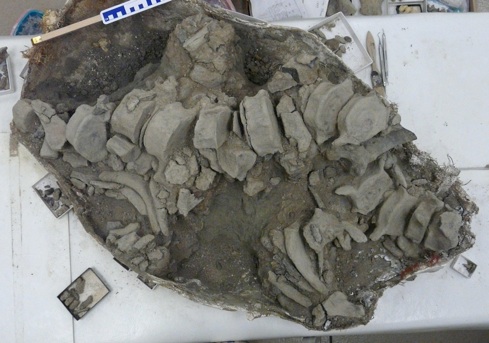 Just before I left for Carmel Church, we opened the jacket containing the vertebral column of “Picasso”. Volunteer Ward Littlefield worked on preparing that material while I was in the field, and the initial results are pretty stunning (above).

We recovered the first 13 vertebrae from “Picasso”. The first vertebra was removed separately (we needed to have a gap between the skull and the vertebral column so we could make two jackets). The next twelve are labeled below: 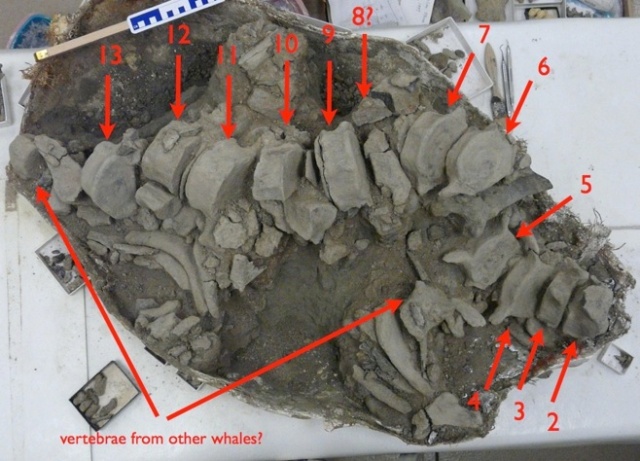 There are some interesting things going on here. Number 8 (the first thoracic vertebra) is labeled with a question mark. That vertebra is broken, and so far I can’t get the pieces to go together to make one vertebra. It’s possible, if unlikely, that there are two partial vertebrae there, which means we would have 14 total instead of 13. Numbers 10 and 12 are also broken in half.

I’ve labeled two vertebrae as coming from other whales. The one on the right I’m sure is from a different animal, but there’s a chance the one on the left could be from “Picasso”; it’s in line with the rest of the column, and there is a broken neural spine sitting next to it.

Here’s a closeup of the area between Numbers 5 and 6: 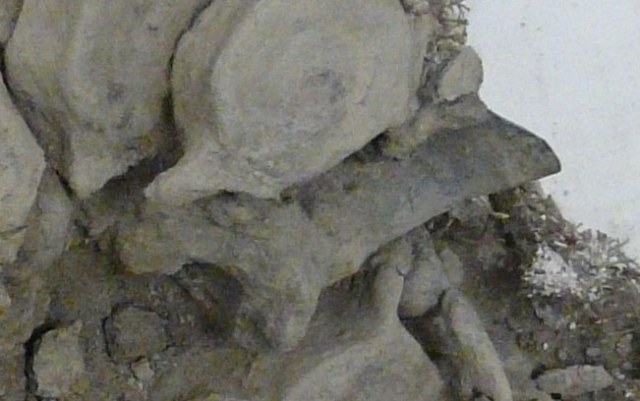 The blade-like bone between the vertebrae appears to be a partial squamosal from a baleen whale. Since we already have both of “Picasso’s” squamosals, this would be from a different individual. 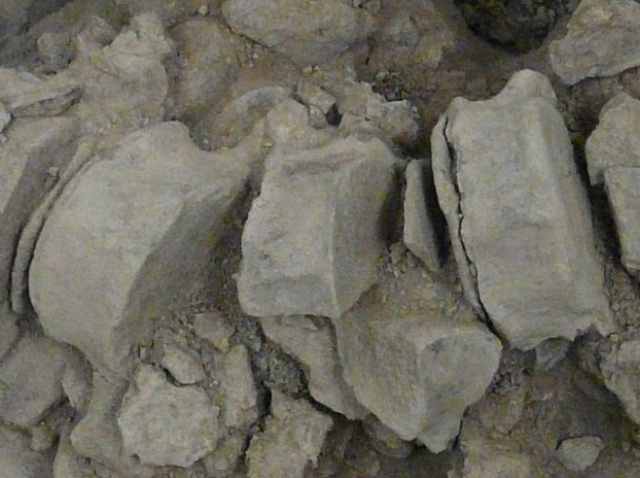 Notice the thin plates of bone on some of the vertebrae. These are loose vertebral epiphyses; the fact that they haven’t fused to the corresponding vertebrae indicates that the vertebrae were still growing. In whales, the anterior thoracics are the last vertebrae to fuse their epiphyses. Since the more anterior and more posterior epiphyses here are fused, that suggests that even though “Picasso” wasn’t quite done growing, he or she was probably a young adult, or an adolescent at the youngest. Even so, it’s noteworthy that “Sinistra”, which is quite a bit smaller than “Picasso”, was fully adult with all the epiphyses fused.