On Thursday night Brett, Tim, and drove to Winchester, in extreme northern Virginia. Northern Virginia has a lot of good exposures of Devonian rocks, and we don’t have a lot of them in the VMNH collections. So Friday morning we met Geb Bennett, the paleontologist from the Shenandoah Valley Discovery Museum, and his son Nick, who led us to several exposures of the middle Devonian Mahantango Formation (equivalent to the Millboro Shale, which is how it’s usually mapped in Virginia).The exposures Geb took us to were dominated by fine-grained shales, with occasional richly fossiliferous beds and some sedimentary structures. Here’s one small section, with up to the right: 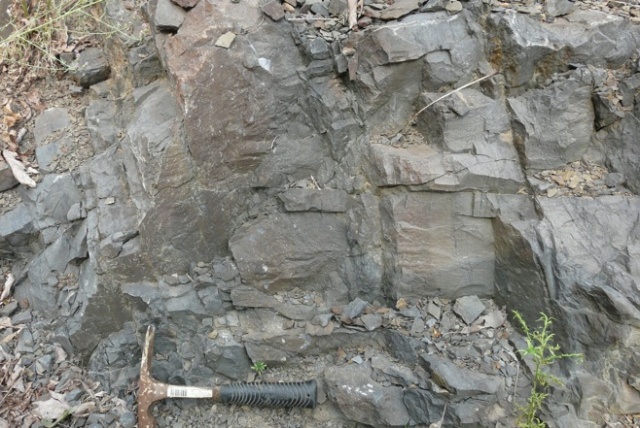 Here’s the same section, marked up to help identify features:

The red line is a fossiliferous zone; the red arrows are pointing to some of the individual brachiopods. The green band is a cross-bedded unit, with a particularly good example indicated by the green arrow. These appear to be hummocky cross strata, which are associated with storm deposition. The fossiliferous unit could also be explained as a storm deposit, so this whole section could be the result of a single storm. If this is the case, however, I’m not sure how to explain the bed between the fossils and the cross strata (the gap between the red and green lines). This is a sandier bed that doesn’t have fossils, nor any obvious cross beds.

Of course, what we came for were the fossils! Here’s what one of these fossiliferous beds looks like up close: 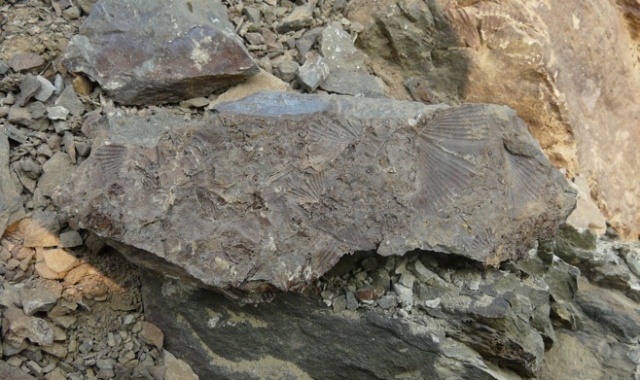 At the first stop we found lots of brachiopods like the ones above, and smaller numbers of crinoid stem segments (there are a few tiny ones in this piece), as well as some bivalve mollusks.

After getting out fill of brachiopods we hiked through the woods to a second outcrop, to stock up on trilobites. Phacops, like the example at the top of the page, was quite common. Geb’s son Nick found this nice cephalon (the head) and donated it to the museum:

We didn’t find any complete specimens, but Brett got pretty close with this one:

Trilobites had compound eyes similar to those of insects, and they often preserve pretty well. Brett found this nice example of an eye (which turned out to have the rest of the cephalon attached):

After spending the morning in the field, we followed Geb and Nick to the Shenandoah Valley Discovery Museum:

Geb has a tiny area converted into an impressive lab/collection room, with a microscope setup that make me very envious: 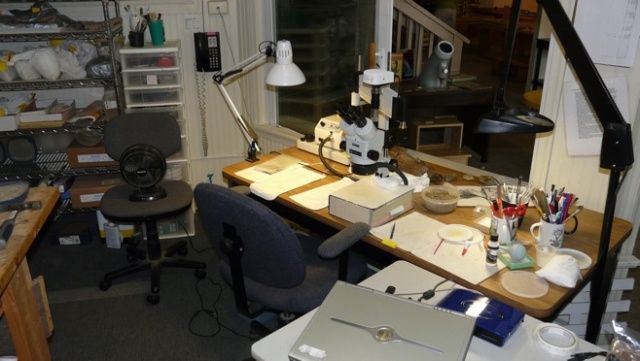 Incidentally, that’s a Triceratops horn just visible behind the microscope; SVDM has several Triceratops skulls that they’re slowly preparing. They’re hoping to move into a new, much larger facility in the near future, and their Triceratops will make a very nice centerpiece to the new museum.

I’d like to thank Geb and Nick, and SVDM’s director Peggy McKee, for showing around their museum and helping us improve VMNH’s Paleozoic invertebrate collection.

This entry was posted in General Geology, Invertebrate Paleontology. Bookmark the permalink.