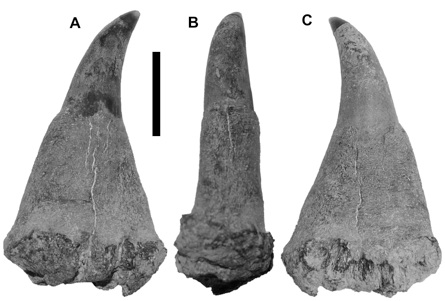 Update: In a follow-up to this post, I essentially decided that almost everything I wrote below is wrong; See this post for details.

Back in January I reported on a beaked whale tooth from Carmel Church, the first one found at the site. Today a description and interpretation of this tooth was published in Jeffersoniana.

This tooth is remarkable for several reasons, the first being that it was found at all. Beaked whales mostly live in deep water, and since most fossil deposits are from nearshore deposits they don’t turn up very often (sperm whales are probably rare for the same reason). This is only the second beaked whale to definitely come from the Calvert Formation.

The tooth is pretty unusual in its own right. As I mentioned in January, the overall proportions of this tooth indicate that it’s probably an apical tooth, located at the tip of the mandible (I can’t absolutely rule out the possibility that it’s a lateral tooth, but the shape and proportions of the tooth are more consistent with an apical tooth). It’s noteworthy that the tiny enamel crown shows no signs of wear, yet the root pulp cavity is closed, indicating that this was a mature animal. How do we reconcile these two features?

We can see a possible resolution to this problem by looking at the apical teeth in modern beaked whales. Most beaked whales have no teeth at all except the apical mandibular teeth. These teeth are sexually dimorphic; they are larger in the males. In fact, in most species, even though the females have large apical teeth they never erupt above the gums. A remarkable example of how strong this dimorphism is can be seen in the modern Tasmacetus shepherdi, the only living beaked whale with a fully functional dentition. Both males and females have a mouthful of teeth, including apical teeth. Yet the apical teeth never erupt in the female, even though they are larger than the erupted lateral teeth further back in the jaw. In the images below (from the Smithsonian Institution Beaked Whale Identification Guide) the male is on the left and the female is on the right. Notice that the apical teeth in the male are heavily worn, while they’re completely hidden in the female:

Most male beaked whales seem to use these teeth for intraspecific fighting. The males will rake their teeth across the flanks of competing males, leaving a series of linear cuts. Check out the scars on this adult male of Ziphius (image from the Cetacean Research & Rescue Unit):

…and compare it to this adult female Ziphius (image from Cascadia Research) (the circular scars are bites from cookie cutter sharks):

This gives us a possible explanation for the observed features in the Carmel Church tooth. The closed pulp cavity indicates that the whale was an adult, and likely a pretty mature one (the pulp cavity stays open well past sexual maturity in modern ziphiids), yet the tooth never got worn down. The most likely explanation is that the tooth came from a female ziphiid, and that it never wore down because it never erupted.

This is interesting from an evolutionary standpoint. The Carmel Church ziphiid is about 14 million years old, making it one of the oldest known beaked whale specimens. The other beaked whale specimen from the Calvert Formation is, of course, close to the same age or slightly older (Lambert, Godfrey, and Fuller, 2010), but the lower jaw was not preserved with that specimen. Also approximately the same age is Nazcacetus urbinai from Peru (Lambert et al. 2009). Nazcacetus had an alveolus (socket) for an enlarged apical tooth, but the tooth itself was not preserved. Finally there is Messapicetus gregarius, also from the middle Miocene of Peru, which was described last month (Bianucci et al., 2010) based on a remarkable eight specimens. With such a large sample, Lambert, Bianucci, and Post (2010) were able to show that M. gregarius displayed sexual dimorphism, and that the males were probably fighting each other like modern male ziphiids. None of the female specimens of M. gregarius had a complete apical tooth preserved, so it’s not known if female M. gregarius had functional apical teeth or not. The Carmel Church tooth suggests that, even as early as 14 million years ago, some female ziphiids already had non-functional mandibular teeth.

Dooley, A. C. Jr., 2010. A middle Miocene beaked whale tooth (Cetacea: Ziphiidae) from the Carmel Church Quarry, Virginia, and implications for the evolution of sexual dimorphism in ziphiids.Jeffersoniana 24:1-11.