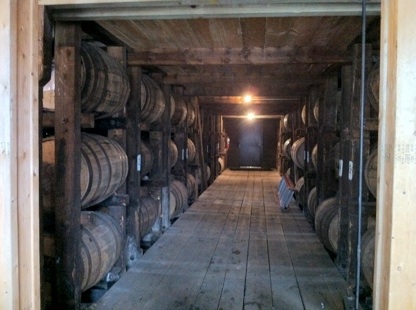 A signature product of the southeastern United States, and one with which my family has had a generations-long relationship (at least as consumers), is bourbon whiskey. Bourbon is produced through a rather complex process involving the fermentation of corn and grain, which is then double- or triple-distilled and finally aged in charred white oak barrels; the general guidelines defining bourbon are actually formalized in U. S. law. Approximately 90% of all the bourbon produced in the U.S. comes from the Bluegrass region of northern Kentucky, so Brett and I spent the weekend there with our friends Andy and Shannon exploring the Bourbon Trail, visiting six distilleries in two days (Makers Mark Distillery’s aging warehouse shown above). But what makes this region so good for producing bourbon?

It’s all in the water. Bourbon production is a water-intensive process, with water figuring heavily in every stage of production (Fryar, 2009). A steady supply of low-temperature water is important for the distilling process, and in early (pre-refrigeration) days that meant natural springs. It helps the fermentation process if the water has a somewhat high pH, as bacteria involved in fermentation respond well to these conditions. A high iron content in the water is bad, as it adversely affects both color and taste. But this simply moves our question back another step; why does northern Kentucky have water with these characteristics?

During the Ordovician Kentucky sat in the tropics, and this area was part of a vast carbonate platform covered by a shallow inland sea. The evidence can be seen in every roadcut in the area (such as the one shown above, south of Lexington), in the form of huge numbers of marine invertebrate fossils. The fauna is dominated by brachiopods and bryozoans, with large numbers or rugose and tabulate corals, crinoids, trilobites, mollusks, and a variety of less common critters:

The rocks containing these fossils are almost entirely limestone, mostly made of of fragments of the shells. This limestone is very porous, and like all limestones is composed primarily of carbonate minerals, especially calcite (CaCO3). Calcite is quite soluble, especially in acidic water, and limestone areas are often riddled with caves and sinkholes, known to geologists as karst topography. The surface expression of karst topography is clear on topographic maps in the form of numerous ponds and depressions, as in this region just east of Bardstown (USGS Bardstown 7.5’ Quadrangle):

High dissolved carbonate concentrations also raise the pH of water (i.e. make it less acidic). As mentioned above, this is good for fermentation, which is the first step in bourbon production, as seen in the fermentation vats at Four Roses Distillery: 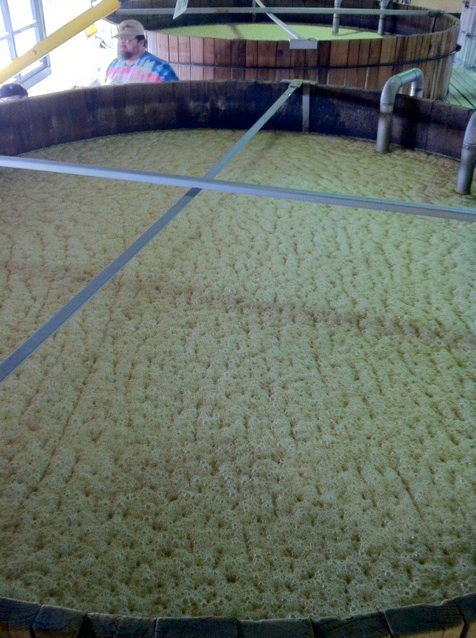 Iron is not a component of the shells of marine organisms, so under ideal conditions carbonates should be poor in iron. However, clastic sediments derived from erosion on continents are iron-rich. Since carbonates are usually deposited in fairly shallow water, there is usually a nearby source of terrestrial sediment, so the limestones often have a fairly large amount of iron. But the Ordovician carbonate platform of which Kentucky was a part was vast, fully 500 miles across. In the earliest Ordovician the coast of North America was a passive margin, so with sea level high there was little or no dry land anywhere near Kentucky (map from Ron Blakey’s Paleogeography and Geologic Evolution of North America website). 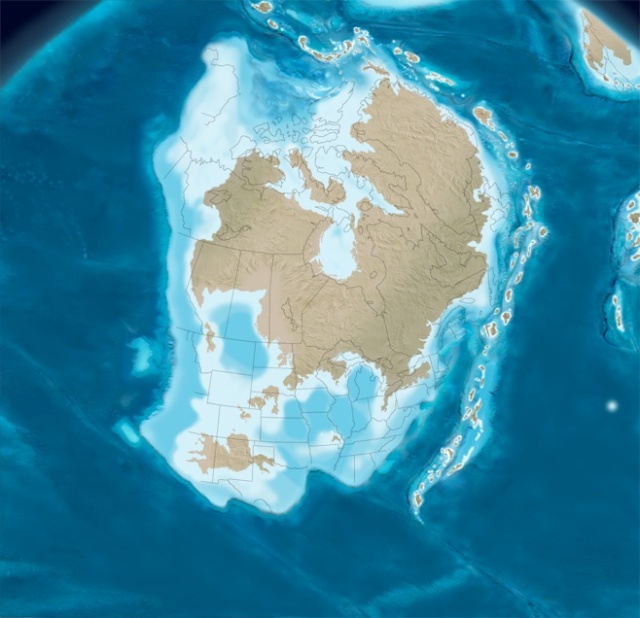 By the late Ordovician, subduction off the coast of proto-North America had resulted in the formation of arc volcanoes. With no significant terrestrial plants, erosion of these mountains was rapid, and they began dumping lots of iron-rich sediment initially into the Appalachian Trough, and eventually onto the carbonate platform. But all this was happening several hundred miles from Kentucky, so even by the end of the Ordovician and into the Silurian there was still no significant terrestrial sediment being deposited in the Bluegrass region (again, map from Ron Blakey’s Paleogeography and Geologic Evolution of North America website):

As European settlers moved west over the Appalachians, the Bluegrass region of Kentucky was the first place these rocks were encountered. While Ordovician limestones are common to the north and west of the Bluegrass region, a larger percentage of clastic sediments results in a higher iron content in the groundwater. The unique conditions experienced by the Bluegrass region 450 million years ago resulted in the deposition of thick sections of relatively iron-free limestones, providing the abundant, clean groundwater needed for bourbon production.

This entry was posted in General Geology, Invertebrate Paleontology, Science and Technology and tagged Bourbon. Bookmark the permalink.

4 Responses to Bourbon and Geology