A few weeks ago I posted about circular trace fossils on the ribs of “Sinistra”, the Carmel Church Diorocetus. In the comments on that post, boesse and I debated whether or not these were barnacle scars, and I was eventually convinced that they were after seeing similar features on the Lake Waccamaw Balaenula skull. After boesse commented that barnacle scars are quite rare on vertebrate bones, I began wondering if we might have other examples in our collections. It took me just a few minutes to find an example. 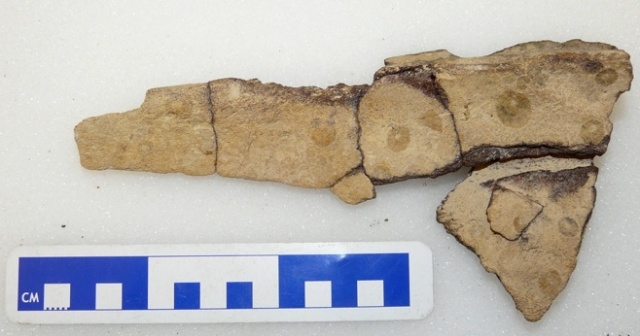 The two fragments shown here are pieces of the maxilla (upper jaw) of a baleen whale, probably from the same individual. They were collected on the James River in Surry County, Virginia from the Lower Pliocene Sunken Meadow Member of the Yorktown Formation.

Between the two pieces there are at least 26 circular or near-circular markings. No barnacle fragments are preserved, but it’s noteworthy that all the scars occur on the ventral (bottom) surfaces of the bone. This is the side that would have been exposed if the skull landed in the typical ventral-up position that is seen so commonly in fossil whales.

Of course, what’s most exciting is that this gives me an opportunity to re-post one of my favorite home videos, footage of actively feeding barnacles that Brett shot at Acadia National Park (although they’re not attached to whale bones):

Tomorrow I’m spending the day at a student conference at Roanoke College, and I’ll be posting on the paleo-related talks presented there, but next week I’ll be posting a little more about barnacles and whales.