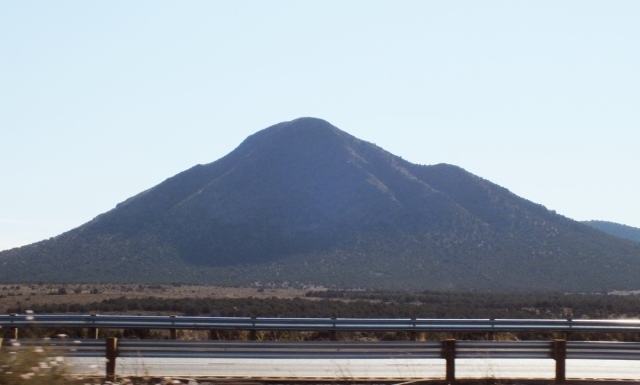 Over the next few weeks I’m going to try to post pictures of some of the geological sites Tim and I saw on our drive to Las Vegas for the SVP meeting. A lot of these are road cuts along interstate highways, where stopping is generally illegal and ill-advised. Fortunately Tim has become quite adept at taking photos out the car window while we’re doing 65-75 mph, so we still managed to get some pretty good shots without causing a wreck or getting a ticket.

The San Francisco volcanic field covers vast area near Flagstaff, Arizona. Apparently this portion of the North American plate has overridden a hot spot similar to those that formed Hawaii and Yellowstone, with basaltic magma eventually making its way to the surface. The area is covered with (mostly) small cinder cone volcanoes like the one shown above. The oldest volcanic rocks, in the western part of the field, are Late Miocene (~6 million years) in age. They get younger as you move east, in keeping with the westward movement of North America; the youngest eruptions at Sunset Crater at the eastern edge of the field only occurred about 1,000 years ago. A few of the volcanoes are quite large; San Francisco Mountain reaches over 12,000 feet (seen below, with several smaller cinder cones in the foreground):

With so many volcanoes, lava flows are common in the area. Some of these are dissected by highway road cuts, exposing the contact between the dark lava flow and the underlying Paleozoic or Triassic sedimentary rocks: 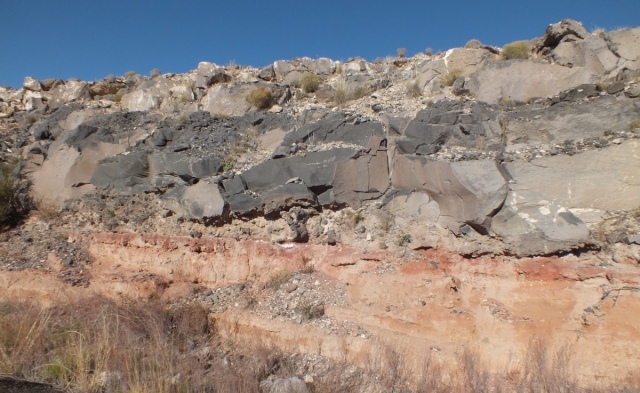 Up close, the complex nature of the contact is more visible (this one was on an exit ramp, so we were able to slow down and get a better picture):

I believe the pebbly layer at the base is the chilled margin of the lava flow, which cooled much more rapidly than the overlying basalt. The dark red band in the top of the sedimentary rocks are interesting. It’s possible (actually, almost certain) that this part of the sediment has been contact metamorphosed by the hot lava flowing over it, and that could be a reason for the color change. However, remember that this was the ground surface when the lava erupted, so this could represent an oxidized soil horizon (which will also result in a red color). In fact, it’s likely that both factors are at play, so that we’re looking at a metamorphosed soil horizon.

I’ll do some more roadside geology in future posts.

This entry was posted in General Geology and tagged Volcanoes. Bookmark the permalink.